Mount Desert Island (MDI) is the largest island off the coast of Maine and the second largest (behind Long Island, New York) on the eastern seaboard of the United States. Widely known as the home of Acadia National Park and the town of Bar Harbor, it draws millions of visitors each year yet only has an approximate year-round population of about 10,615 (see Towns of MDI below). This has created special challenges to accommodate the increased traffic that the huge numbers of visitors bring each year as well as to provide affordable housing for those who are hired for the seasonal supportive roles. Some believe that the area has an over-abundance of seasonal vacation rentals and hotel rooms, versus yearly rentals. As a result, the nearby commercial center of Ellsworth has seen substantial growth by taking on this surplus need. The National Park Service is in the early stages of building a new Visitor Center on the mainland in Trenton just before reaching Mount Desert Island with the hope that many will leave their vehicles there and take the free shuttle buses to their island destinations.

Many visitors to the area, as well as those about to visit, are confused about how to pronounce the word “Desert” as used in Mount Desert Island. By most who live in Maine, it is pronounced more like “Dessert” as in a cookie or a piece of pie. More often than not, the second syllable is accented as in “de-ZERT” following the French manor of speaking.

The Look and Lay of the Land

If we viewed the island from the air (a look at the Acadia map will do), we would notice north and south aligned gouges scooped out of the land as if by a very large hand. Indeed! In this case, the hand was that of a huge, slow moving, continental glacier over a mile high,... almost 2 miles thick in some places. When this giant glacier finally melted and retreated, it left rounded and bare mountain tops, elongated ponds and lakes, many boulders, and the seven mile long Somes Sound. (Once designated as a fjord, it is now, more accurately, called a fjard.)

A good place to see the impact that these enormous glaciers had on the land is with the distinctive shape of Sheep Porcupine Island, located offshore to the northeast of Bar Harbor. It is easier to see because of its smaller scale. Elsewhere on Mount Desert Island is the massive Cadillac Mountain. Even after being sheared off by the glaciers, it remains the highest point along the North Atlantic Seaboard at 1,530 feet (466.34m) above sea level and provides spectacular panoramic views of the land, ocean, and communities far below. 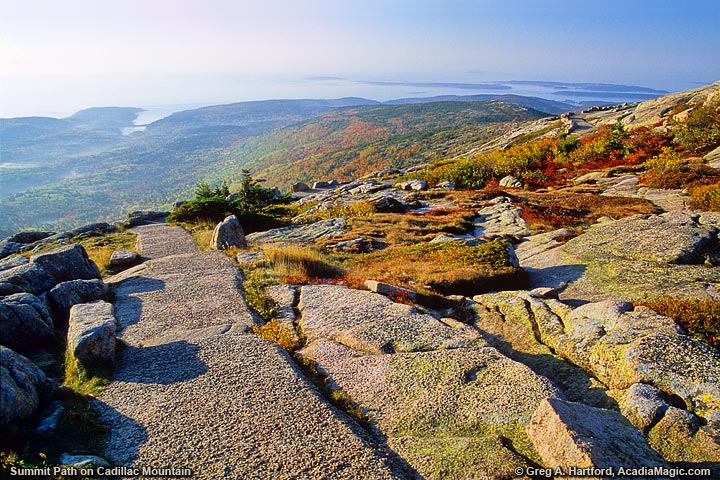 To the original coastal Abnaki Indians, Mount Desert Island was known as “Pemetic” (the sloping land). Historical accounts said that the Abnaki's permanent villages were located on the mainland and that they regularly fished and gathered shellfish from MDI in the warmer months. However, recent Archeological evidence supports just the opposite scenario. The more temperate coastal weather kept them in places like Mount Desert Island during winter months. In the spring, they ventured further inland to hunt and fish for the salmon in the rivers that were returning to spawn. (See Abbe Museum for this history.) The island got its current name from the French explorer Champlain who's ship ran aground here in 1604 AD. (Refer to the story about the “Spindle” on the Otter Cliff page.) Champlain was so struck by the appearance of the mountains on the island that he named it "Isle des Monts Desert," or "Island of barren Mountains." Today, MDI is best known as the home of Acadia National Park, where land and sea, mountains and shore, meet in a natural and spectacular setting.

There are many people who are surprised to hear that there are actually only four official townships on the island. They are Bar Harbor, Mount Desert, Southwest Harbor and Tremont. Bar Harbor encompasses the sections of Eden (once the original name for Bar Harbor), Hulls Cove, Salisbury Cove and Town Hill. Mount Desert, although having no official town “center,” consists of Hall Quarry, Northeast Harbor, Otter Creek, Seal Harbor and Somesville. With Southwest Harbor comes Manset and Seawall. Bass Harbor, Bernard, Seal Cove, and West Tremont are part of the town of Tremont. According to the 2010 Census, the year-roud population of the four MDI towns are as follows: Bar Harbor at 5,235, Mount Desert at 2,053, Southwest Harbor at 1,764, and Tremont at 1,563. The total is 10,615. According to the Tremont Town Manager, there are no year-round residents on the smaller out-islands such as Gotts Island. To view a list of the various towns and villages, including those near Schoodic Peninsula, visit Towns & Villages of Acadia. 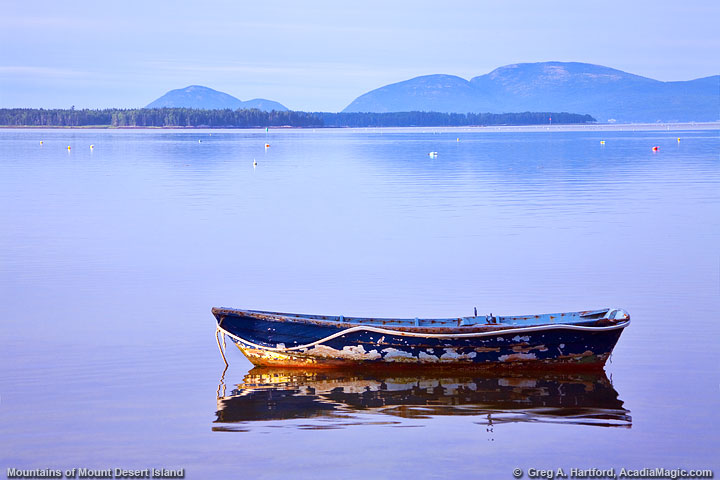 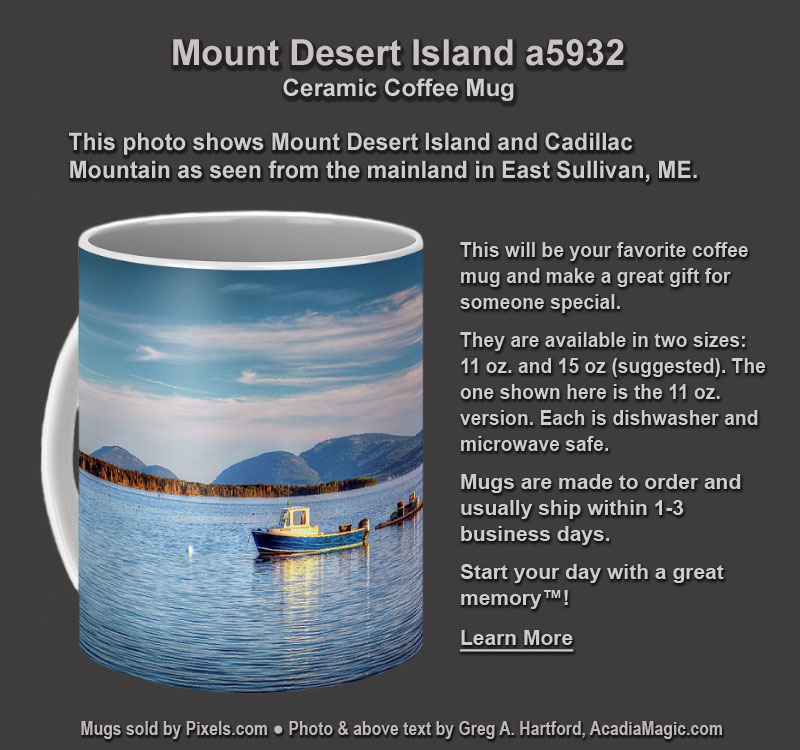 Start Your Day With A Great Memory™.

“When we received our first order, we were surprised at how good it looked and how it set the mood in the morning. We only needed to select what image to use.” (There are many to choose from.)

This photo shows Mount Desert Island and Cadillac Mountain as seen from the mainland in East Sullivan, Maine near U.S. Coastal Route One. The same image may also be ordered as a print, cellphone case, throw pillow, blanket, bath or beach towel, even a shower curtain or face mask.

Ceramic mugs are available in 11 oz and 15 oz sizes. We suggest the 15 oz version. They are dishwasher and microwave safe. Mugs are made-to-order and usually ship within 1-3 days.

Products are sold by Pixels.com • Photo by Greg A. Hartford

Will You Go Straight, or Take a Left?

Each time I drive along Route 3 between Ellsworth and Trenton on my way to Mount Desert Island, and start seeing Cadillac Mountain in the distance, I get a flood of memories and emotions whose roots span many decades. These often involve an old uncle, my grandfather, or my sisters, brothers, or cousins. The associated images of those times flash along a road that leads to an island, a place so unique that people “from away” and even long time “Mainers” return there each year. Having just one road on and off somehow adds to the mystique. My passion for photography grew largely from the desire to show others the exceptional landscapes and seascapes that exist here. When I first reach Mount Desert Island from the mainland, there is an immediate choice to make. “Shall I go straight or shall I go left?” Straight goes to the interior through Somesville, possibly to Northeast Harbor or Southwest Harbor. Taking that immediate left follows the northern coastal part of MDI until arriving right in Bar Harbor. When I plan on doing some photography, it usually starts very early, well before the sun rises. What I want to capture determines whether I “take the left, or continue straight.” Either way is a sure winner.